Primal (and low-FODMAP) on a budget: Hash 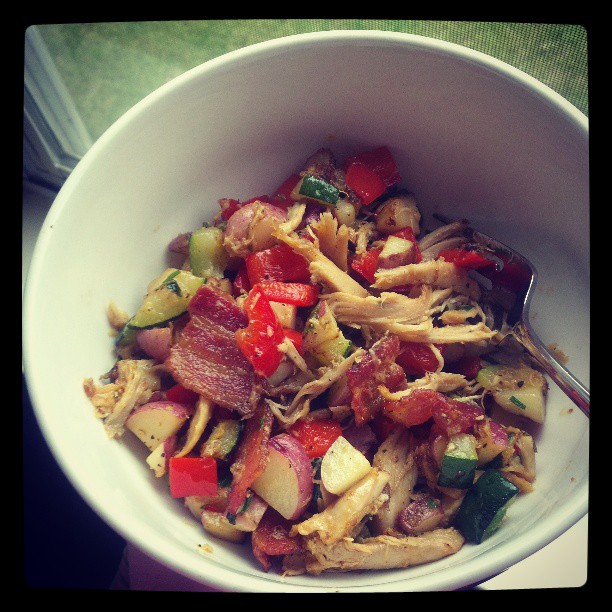 Back in March I had this infection, see. I will spare you the details but it wasn't anything too bad; however, I am allergic to all the stuff that doctors usually prescribe for this particular thing so I ended up on Cipro. I was scared half to death because heavy-duty antibiotics usually do a real number on my guts, but I am here to tell you, my guts have never been happier than during the 10 days I was taking that stuff. I've always had digestive issues, let's call them, and this stuff FIXED THEM. Just like that. Until I finished my prescription.

At first I was thinking, okay, well, it was the drugs. The drugs fixed me and now I'm broken again because I'm not taking them anymore. Then I was thinking, okay, well, I was not eating any dairy whatsoever while I was taking those drugs because you aren't supposed to, and I know I have trouble with dairy already, so I'll go off the dairy again! And IT FIXED ME. For a couple of weeks. And then I was broken again. I started taking probiotics and drinking kombucha and eating raw fermented sauerkraut and if anything the problem got WORSE. Um, what?!

This led to me frantically Googling things like "PALEO DID NOT FIX MY GUTS OMG WTF WHY IS THIS HAPPENING" which led me to FODMAPs and holy cow, about 80% of my diet at the time was made up of vast quantities of things on the Do Not Eat list (fructans and polyols especially). So yeah. Maybe there is something to this FODMAP thing? I dunno, but I am going to try cutting WAY back on those foods for a bit and see how I do.

And that is my roundabout way of tell you that hash is good, hash is cheap, hash is super customizable to whatever foods you happen to be eating and/or tolerating at any given moment. Hash is really just bits of stuff all cooked together, I mean really, it could not be easier to make.

For the version in that photo up there I just chopped up a couple of slices of bacon and cooked them in a skillet until crispy, then added cubed red-skinned potatoes (if you don't eat potatoes, just leave them out -- my reasoning is that they're a whole food and therefore not verboten in my version of primal/paleo but my blood sugar is fine and I'm not trying to lose weight so you do whatever), cubed zucchini and diced red bell peppers. Then I tossed in some shredded, cooked chicken and a handful of chopped fresh herbs, stuck a lid on the pan, turned the heat down to medium and let it cook, stirring frequently, until the veggies were tender. Season with salt and pepper and Bob's your uncle.

This makes a very filling, satisfying dish. You can throw in whatever meat and veggies you like (I would LOVE to have added onion but it's a FODMAP no-no) and you can get by with small quantities of more expensive ingredients (like decent quality meat) while bulking it out with cheap stuff (like in-season veggies). And you can make a crapload of it and eat it all week for lunch! Yeah!

So yeah. Hash is good. FODMAPs are delicious bad. Apparently. I'll let you know what happens.
Posted by Kathy at 11:34 AM