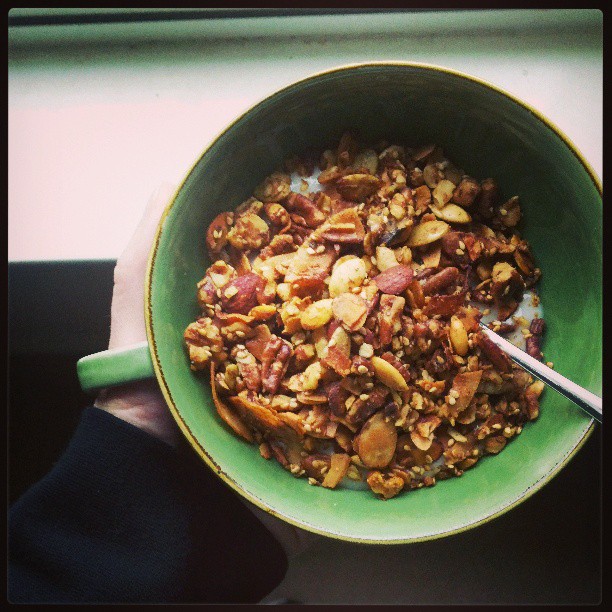 I am pretty firmly on record as being a fan of homemade granola. It's super easy to make, it smells amazing while cooking, it's an awesome quick snack and can top everything from yogurt to salads. And it's a great way to get a little extra protein and healthy fat into your diet.

I was thrilled to discover that primal granola is just as easy to make as the oat-based stuff. It's so easy, in fact, that I don't really have a recipe for it. (I really should start measuring ingredients if I'm going to blog about food, shouldn't I? Yeah. I'll get right on that.)

Anyway, here's what I did:

First I put some melted coconut oil and some pure maple syrup into a giant bowl. If I had to guess, I'd say it was maybe 1/4 cup of each, but keep in mind that I do NOT like my granola to be overly sweet. You'll want to adjust accordingly if you have a sweet tooth. I added a bit of vanilla extract and a generous pinch of salt and whisked it all together.

Then I dumped in the following raw nuts and seeds. This combo is just what I happen to like and what I had on hand; you could certainly change this up quite a bit: chopped walnuts and pecans, sliced almonds, pepitas (shelled pumpkin seeds) and sesame seeds. I also added a handful of unsweetened coconut chips -- you know, the big, shaved flakes that you put in trail mix. I'd say the nuts/seeds/coconut measured around 4 or 5 cups total. (I opted not to add any dried fruit, preferring to add that to each serving separately, but you definitely could throw some into the mix at this point.)

Finally I beat an egg white until frothy and added that as well. Mix it all together, spread it out on a foil or parchment-lined baking sheet, and bake at 300 degrees until toasted but not too brown, stirring every 15 minutes or so. Mine took about 40 minutes but you do want to keep an eye on it. Let cool completely and store in an airtight jar.

If you want to keep this both primal AND vegan, just leave out the egg white. The granola won't form clusters that way but, you know, that's really just a matter of aesthetics. Either way, you'll never miss the oats.
Posted by Kathy at 7:55 AM